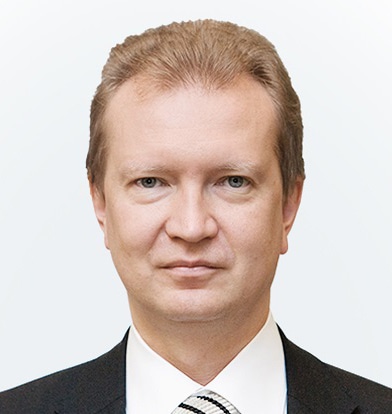 Vadim Mikhailov First Deputy CEO of Russian Railways
The Group’s income in 2017 grew by 5.6% y-o-y to RUB 2,252 bn, while our operating expenses decreased by 2.2% y-o-y to RUB 2,049 bn. The key driver behind that drop was the 2017 reduction in losses from fixed assets impairment. This was made possible by the Russian Government’s decision to introduce a long-term tariff policy until 2025, enabling Russian Railways to stabilise its long-term outlook and drive down losses from the impairment of fixed assets.

In 2017, the Company for the first time introduced a mid-term IFRS financial plan for 2018–2020 within the consolidation perimeter of the financial statements (ca. 190 companies, including international) applying transformation methodology to the target numbers produced under Russian standards.

The Group’s revenue was mainly attributable to income from freight transportation and infrastructure going up by 9.5% y-o-y to RUB 1,449 bn. Income from logistics services amounted to RUB 345 bn, including on the back of growing currency proceeds of logistics company GEFCO. This segment’s income accounts for ca. 15.3% of the Group's aggregate revenue.

In 2017, EBITDA went up by 11.8% to RUB 496 bn. EBITDA margin increased to 24.7% against 23.6% in 2016 on the back of growing income coupled with lower operating expenses resulting from efficiency improvement efforts.